I HATE reading novels. God only knows how I hate reading them, especially the ones that has words like “Love” or “Cinta” stamped to the title. However, the LOVE of MY life (my dearest wife, of course) is an avid novel reader. She just crazy about novels, and she keeps on pushing me to read this particular book:

The story actually is more about Islam, and full of Islamic values that can be learned. There’s so many positive reviews (spoiler alert) of this novel, and some even calls it as a soul builder. I still remember there’s one night, I picked up the book at 11 p.m., and still continues reading it up until 6 a.m. in the morning. It’s just that hard to put it back down once you’ve started reading it.

A Short Synopsis
The story follows a character named Fahri, a student at the Al-Azhar University, Cairo. It guides us through the situations and lives of Indonesian students in Egypt. It also tells us a story of a relationship of two families that inside we can find the tolerance between Muslims and Coptical Christian (a part of Christianity that been followed by peoples at Egypt).

The Motion Picture
Following the huge success of the book, a movie of the same title by Hanung Bramantyo starred by Fedi Nuril, Rianti R. Cartwright, Carissa Putri Melanie Putria, and Zaskia Adya Mecca, was released on February 28, 2008 in Indonesia, May 8, 2008 in Singapore, and June 19, 2008 in Malaysia. Malaysian Television, TV3, shows the motion picture on it’s channel on October 10th, 2008, the 10th day of Shawwal. 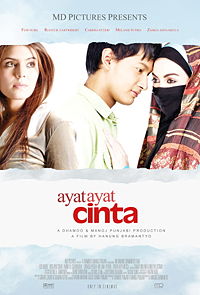 However, please bear in mind that the movie has quite a different theme and focus from the book. It’s probably intentional, and it’s not easy to cramp 500+ pages of a book to 2 hour movie. The book has more detailed and different approach on it’s story and purpose.

Original Soundtrack of “Ayat-Ayat Cinta” the movie below for your enjoyment. Sure sets the mood right and give it “feel”. 🙂
(BTW, anybody got a good guitar tabs/chords on this one, gimme a shout).