in Ubuntu, when there’s menu active or visible, pushing ‘Print Screen’ won’t have any effect. It applies to taskbar, context menus, right-click and other menus. But I have a workaround on this one:
Simply let Gnome automatically take the screenshot, and delay the action.
In your terminal, type:
gnome-screenshot --delay=5

It has been almost a month now since I’ve started application development in Python. Before this, I’ve already started playing with it in my spare time. (Yeah, instead of doing important stuff like mowing the lawn, fixing the light bulb, or playing with my children, I’ve decided to learn a new programming language! I really need to set my priorities straight).

Before this my encounter with Python is merely just a few samples, consists of some web forms and web pages, using mod_python configured on Apache running on my headless CentOS box (VM actually). Run a few queries against MySQL using MySQLdb module, returns a few results, display it on the web apps, and that’s it! The experience is limited, but enough to learn it’s syntax and flow.

Now I’m developing actual program in Python at work. (Finally, something to add to my resume :)). It’s more of a client-server application, but involves a lot of components and API’s to get around with. I’ve been using win32api’s, win32net, Windows Services, WMI for remote execution, etc, etc. At times I felt my head is going to explode. But, it’s fun! At least I have something to wake up every morning to.

Python is a general-purpose, high-level programming language. Its design philosophy emphasizes programmer productivity and code readability. Python’s core syntax and semantics are minimalistic, while the standard library is large and comprehensive. Its use of whitespace as block delimiters is unusual among popular programming languages.

Any experience or opinions on Python? What your IDE of choice? For those who’re interested, expect more post regarding Python soon. Source codes, samples and more.

For Mac users, the Mac version of uTorrent (beta) is officially here. Enjoy!

I’m going to re-blog what a friend of mine, ady has just put on his post on how terible Cosmic Bowl are. Just to emphasize on how bad things were over there.

We just had a bowling session last week, and what a dump the place was. The equipment malfunctioning all the time. There’s not much bowling ball weight to choose from. And whatever bowling ball they have, it was chipped and has a big hole on it!! (Not to mention all the problem ady has found out).

To the management, please improve your condition. The Malaysian consumer just had it with all this corporations and businesses who just keep thinking of the profit without giving much value to whatever we’ve paid for.

Gmail fans have been building unofficial extensions to spice up their inboxes for a while, but up til now themes haven’t been an integral part of Gmail. We wanted to go beyond simple color customization, so out of the 30 odd themes we’re launching today, there’s a shiny theme with chrome styling, another one that turns your inbox into a retro notepad, nature themes that change scenery over time, weather driven themes that can rain on your mailbox, and fun characters to keep you in good company.

Some screen shots of the new theme: 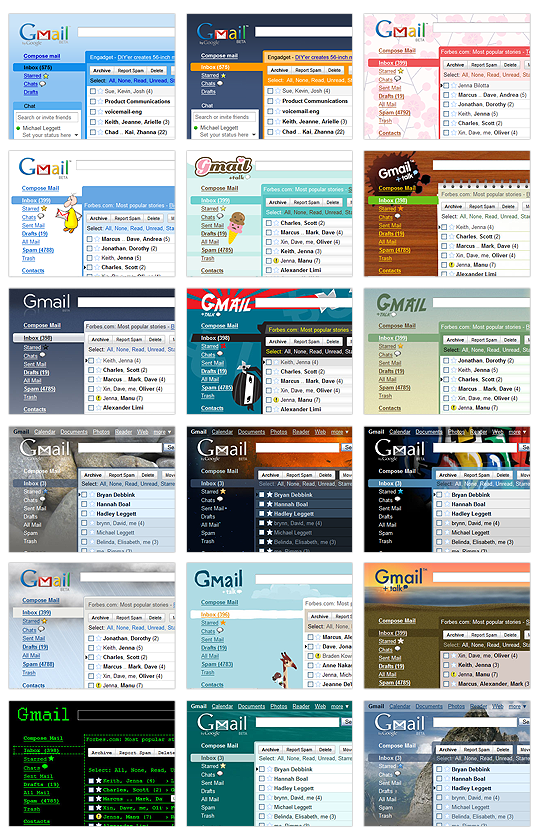 To customize your inbox, go to the Themes tab under Settings. I don’t see the settings available yet on my account, so I might be checking back soon.

UPDATE: The themes setting is available now on my account. Should be available on yours too. Enjoy. Woohoo!!